Welcome!
Close
Would you like to make this site your homepage? It's fast and easy...
Yes, Please make this my home page!
No Thanks
Don't show this to me again.
Close

best known early portable Maclone came from Outbound in August 1989, just weeks before Apple announced the Portable.the Outbound Laptop was significantly lighter and easier to carry than Apple's own mac portable.The Portable Plus used the same 68000 CPU as the Plus and SE, but runs it at 15 MHz. It had a unique built-in pointing device.  The Outbound required ROMs "borrowed" from a Mac Plus or SE.To use your desktop computer, you could attach the Outbound to your Mac, giving it access to the pulled ROMs. To attach a SCSI device, you had to buy a $95 adapter.It also came with the option to have an internal floppy drive but most shipped without one,since there was external floppy drives that outbound made to be used with it. still, at $3,995 with a 20 MB hard drive and a 10 pound weight, it was an attractive alternative even after Apple's Portable shipped.

My outbound was bought off a guy who lived in arizona sometime in 2005. he was'nt the orginal owner but had taken good care of the outbound as you can tell from the pictures below.these are becoming very rare now and are rarely seen for sale on ebay.i have only seen maybe 2 or on ebay in the last 3 or 4 years.i got mine from the actual outbound user website classifieds section.I had always wanted an outbound of some sort so i forked over the $140 he wanted for it.It is one of my favorite computers in my collection and will never sell it.

the Isopoint Trackbar, that rolled to scroll up and down, moved sideways to scroll right and left. The Trackbar was part of the detachable keyboardWith one's hands in the usual position on the keyboard, one need only move one's thumb slightly to use it. 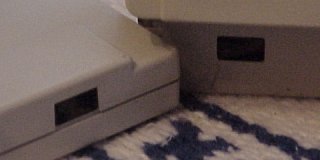 The fact that the outbound had 2  infrared ports allowed you to use the keyboard wirelessly if you wanted to. Which was way ahead of its time and a feature that most other portables at the time had. 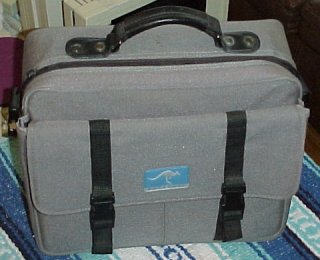 The outbound also included a nice carrying case with the kangaro logo.

The outbound and all of its stuff

scsi adapter for the outbound

not many ports on the outbounds. im not even sure what they all do

©all images are copyright 2005-2006 Chris Slaymaker, All Rights Reserved